skip to main | skip to sidebar

Yea the beat cold but the flow is anemic

So, I've come to the realization that there is a huge difference between temperatures in the 30's and those in the teens. When it's in the 30's, I think it's a bit nippy but refreshing to be outside, when it's in the teens I want to scream obscenities at the weatherman and curse myself for moving up North. I mean my 20-minute walk becomes hell when it's in the teens. And my face becomes numb, and when it's cold outside (anything below 40) my nose runs which isn't a big deal except when my face is numb and I can't feel the trail of snot oozing from my nostrils. But what can you do? I mean, I could take the subway to work but I hate hate hate the nastiness of that, so I would rather be a crusty snot face. Another thing I hate when it's this cold is that I have to wear gloves which makes it impossible to turn the dial on my iPod. So this morning on my walk I was fooling around with my iPod trying to get it on the playlist I wanted when I saw the guy beside me on the street talking to me, so I take my ear bud out and say "what?!" and he says "it's good to know that iPods don't freeze, you should be in an ad for them". To that I gave my usual half-smile/half-chuckle, my polite way of saying please don't bother me when I have my ear buds in! Unless of course, you are trying to tell me that I have a trail of crusty snot on my face.
Posted by Lea Anne at 6:16 AM No comments: Links to this post 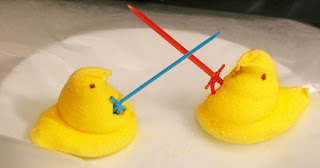 Okay, so most of you know that I love peeps (the marshmallow candy). I have been so excited recently because all the stores around my work have put out their Easter candy selections, and I have been buying a pack a day. So Friday at lunch I went and got my peeps and came back to my office and inhaled my ten hot pink chicks. Then I got to thinking....I wonder what peeps are made of? And then I thought HOLY SHITAKE I bet they are made of gelatin. And we all know what gelatin is.....Gelatin is a protein produced by partial hydrolysis of collagen extracted from the bones, connective tissues, organs, and some intestines of animals such as the domesticated cattle, and horses. I almost cried, it really sucked all the fun right out of my Friday. I guess it was a good thing I had already eaten my chicks. So long peepers.
Posted by Lea Anne at 9:58 AM 3 comments: Links to this post

One. I wish Hillary Clinton would shut her pie hole.

Two. We finally got snow here! yay!
Posted by Lea Anne at 10:08 AM No comments: Links to this post

It's been a little while since I last posted as things have been a little crazy. But I thought it was necessary to share my excitement that as of now Obama is ahead of Clinton. Much thanks to my Mom, who would probably rather do a lot of things before voting for a liberal, for throwing a vote Obama's way for me!!
Posted by Lea Anne at 10:09 AM No comments: Links to this post

Be a bonfire when others are just a flame 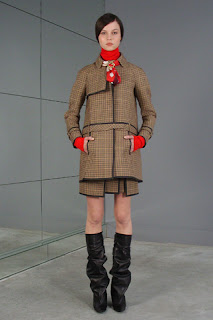 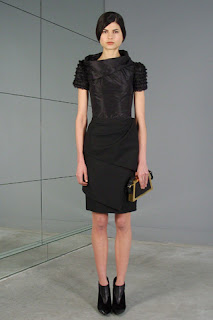 Every season when fashion week comes around I am always mesmerized by the sheer brilliance that Nicolas Ghesquière creates. This guy is a creative fucking genius and I can never get enough of what he has done at Balenciaga. He always chooses a theme and takes it to just the right extreme; his collections leave me utterly speechless. I can't even begin to put into words how immaculate his Pre-Fall 2008 collection is so I'm not even going to try.
Posted by Lea Anne at 10:50 AM No comments: Links to this post

So most people reading this already know, and maybe some don't, that as of 2K8 I have decided to become a vegetarian for a multitude of reasons which I won't get into now. So-I was bored the other day and goofing around on some vegetarian website and I saw a link to vote for Sexiest Vegetarian Celebrity of 2008, I wanted to know who was on this list so I clicked and was kinda surprised at what I found. Who knew that 3 members from my favorite hip hop group of all time were vegetarians. RZA, GZA, and Masta Killa from Wu-Tang are all vegetarians, not that this is SO shocking but I just would have never guessed. It made me giggle a little, but makes me respect them more also. And on that note, I must give props to my Mom who after hearing my stance on the whole veggie thing also decided to give up meat. Since I live in NYC it's not that hard of a sacrifice because there are tons of vegetarian/vegan options for food all around, but it is more of a sacrifice for my Mom since she still lives (where I grew up) in a really small Southern town where people slaughter animals and hang 'em on their walls. So thanks Mom.
Posted by Lea Anne at 6:40 AM No comments: Links to this post